Much has been written recently about the unacceptable quality of auditing in the UK. While this is not solely a UK problem, the collapses of Carillion, Conviviality and most recently Patisserie Valerie have quite rightly led some investors here to question whether they are receiving the protection they have a right to expect.

The reputation of the auditing profession is in tatters. Countless articles have been written, and their own regulatory bodies, here and overseas, have been highly critical. The International Auditing and Assurance Standards Board is “an independent standard-setting body that serves the public interest by setting high-quality international standards for auditing”. I leave the reader to judge how tough the threshold might be, but here the Financial Reporting Council (FRC) targets 90% of FTSE 350 audits to be classified 1 or 2A.

The FRC’s July, 2019 report indicated that audit quality was significantly below its own threshold.

“75% of FTSE 350 audits assessed as good or requiring limited improvements. The FRC’s target is 90%. Overall there has been no improvement on last year.”

“25% of assessed audits are below an acceptable standard”

The report acknowledged that “audit is vital to investor confidence in UK companies”, and that “poor quality audit work remains unacceptably common”. This surely is evidence that the problem is serious.

And this is not a new problem as is evidenced by the chart from the FRC data: 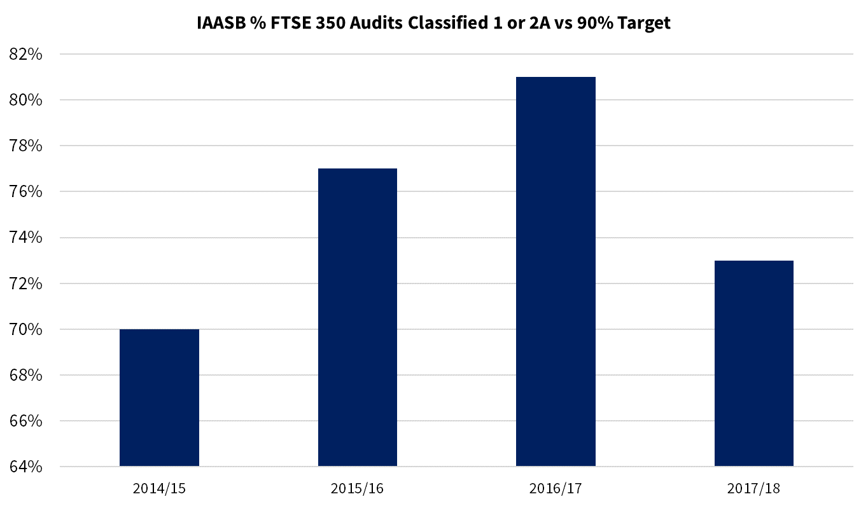 This is not just a UK phenomenon. The Australian Securities and Investments Commission found that 20% of audits lacked the necessary rigour in its last 18 month review to June, 2018, albeit down from 23% in the previous period. (Background).

Shareholder advisory group PIRC in March of this year criticised eight UK companies where there were potentially inappropriate connections between director sin the audit committee and the auditors. For example, at BHP, the mining group listed in the UK and Australia, Lindsay Maxsted, the chair of the firm’s audit committee, was until 2007 CEO of KPMG Australia; yet KPMG is its auditor. According to Pirc, an ‘exceedingly close relation between the auditor and the company’ that is ‘considered highly inappropriate’. (Background).

WHAT TO DO ABOUT IT

We believe that four initiatives would largely solve the problem, and that the Audit, Reporting and Governance Authority (ARGA), the new replacement for the Financial Reporting Council would then have a much higher success record than under the current system. Our recommendations are that

1.       FRC/successor letters to companies should be published openly

2.       Auditors should audit the non-GAAP earnings number and publish an “acceptable” eps range

3.       Audit committees should disclose any conflicts with audit firm

4.       Audit committee should receive a formal report from the company’s broker on short interest in the stock with explanations.

Any one of these recommendations alone would generate a significant uplift in audit quality.

The FRC Conduct Committee issued 220 letters to companies in 2017 (2018 data have not yet been announced). None of these has been published. The FRC told me that they could not publish letters which were the subject of a confidential exchange with company management. This makes no sense.

In the US, the SEC publishes comment letters when it writes to quoted companies. Notably one such letter preceded Citron Research’s short selling attack on Valeant Pharmaceuticals, which led to a $80bn reduction in market capitalisation. Valeant’s practice of channel stuffing using “subsidiary” Philidor was first raised by the SEC. There is no reason why the FRC, or its successor body should not publish its letters, the day following (or two days after) their receipt by the company, to allow management time to frame its response to investors.

This simple change, which requires no additional work or cost, would create a climate of fear and respect among company managements – the last thing a Finance Director would want would be the FRC (or ARGA) publishing criticism of its accounts. This is the most significant recommendation with reference to UK companies.

AUDITED NON-GAAP AND A RANGE OF ACCEPTABLE EPS

The non-GAAP earnings measures reported by the majority of companies are unaudited. Introducing a requirement to audit these critical data, relied on by investors, would introduce discipline into the process.

We suggest that auditors instead of simply stating that the earnings are true and fair, should calibrate that opinion. They should provide a range of acceptable earnings per share. This will entail additional work and a lot of argument as to how to frame it, but that debate would be worthwhile, as it would force the profession to introduce greater precision in this critical parameter.

Of course,  for some companies the range would be very wide, but that is surely useful information for investors. For all companies, it would be clear if the Finance Director was adopting a conservative or aggressive approach. Imagine the range at Carillion and where the reported number fell within that range – it would be a clear warning to investors.

Where the Chair or another member of the Audit Committee used to be a partner of the company’s audit firm, the independence of the committee is called into question. Investor have a right to know such information.

Eric Tracey’s May 2019 paper, Audit Quality, suggested that an independent body, for example the company’s broker, should report to the audit committee if there is a large short interest in the company’s shares and the reasons. This would ensure that the committee was aware of the concerns prevailing in the market. This would have helped at Carillion where the stock was heavily shorted, and market practitioners were apparently more aware of the true situation than some of the board. It’s a simple idea and would be cheap and quick to implement.

Some of these measures would have a cost, notably the auditor framing an eps range. Some would be free – the publication of FRC letters, for example. This is too important an issue to leave and it’s worth spending some time and money correcting it. Some of our proposals could be implemented tomorrow. Change is overdue.

If you liked this blog, you can scroll down and subscribe to be notified of future blog posts.