Russell Napier is one of the foremost macro commentators in the world and has been an adviser on asset allocation to global investment institutions for over 25 years. He is the author of Anatomy of The Bear: Lessons From Wall Street’s Four Great Bottoms and of The Asian Financial Crisis 1995–98: Birth of the Age of Debt. He founded and runs a course called A Practical History of Financial Markets (in person and online), he founded the Library of Mistakes and is a non executive director of more than one quoted company.

Jeremy Hosking is a partner of Hosking Partners and was previously a founding partner of Marathon Asset Management in London. He is a co-author of the cult book Capital Account and its sequel Capital Returns (on whose cover Russell Napier is quoted). Both books explain the Capital Cycle theory, whose origin Jeremy discusses in the podcast.

In this interview we discuss the coming age of financial repression and why the capital cycle theory will be so important for investors in this new era. We also discuss the banks sector, the Asian crisis, value vs growth and the problem with ESG.

In this fascinating interview, we have a wide ranging interview with Russell Napier and Jeremy Hosking, covering everything from banks to ESG, from Tobin’s Q to excessive liquidity, and from the tragic events in Ukraine to the sinking of the Titanic. One theme is constant, however – the capital cycle, and we discuss in detail its mechanics and the reasons why it’s such an effective investment tool.

I have known Russell for several years – we met in a bar in Hong Kong and continue to have fascinating conversations over a glass. Russell has long been one of the most intellectually advanced thinkers in the stock market and often prefaces his predictions with the caveat that he can be years early. His last major forecast – that he was abandoning his long held view of disinflation and now foresaw an inflationary period ahead – in the summer of 2020 was prescient.

Quite coincidentally, I also met Jeremy in Hong Kong, at an investor presentation by Manchester United. He is a shareholder in Crystal Palace. H enow runs Hosking Partners, a global long-only value firm, having previously been a partner in Marathon Asset Management which produced the books Capital Account and Capital Returns, both authored by Edward Chancellor.

Russell had agreed to do the podcast and as his last quarterly was entitled the Capital Cycle in an Age of Financial Repression, suggested we get Jeremy to join us to give his unique perspective on this topic.

Many investors have come into the business in the last ten years and it would be easy to assume that an era of falling rates and massive liquidity was normal; that growth stocks would be pushed to excessive valuations, especially in private markets; that companies in the real world would continue to be starved of investment; and that mean reversion was a 20th century phenomenon.

In the podcast we discuss why such a view will produce terrible investment results in the next decade and we touch on why the retreat of globalisation adds another dimension to the capital cycle argument. We recorded the podcast on Thursday, March 10 and Russell and I met David Einhorn on Monday, March 14. His commentary was such a strong reinforcement of our podcast discussion that I recorded a postscript with Russell afterwards.

Russell trained as a lawyer and joined Baillie Gifford in order to work in Edinburgh, rather than out of any strong desire to be a fund manager. Jeremy’s first role was with growth manager GT Management and watching the tech collapse in 1983 led him to the capital cycle approach. He and two partners then founded Marathon – he was the oldest at 28

THE ERA OF FINANCIAL REPRESSION

Russell Napier changed his long held disinflationary view when he saw the degree of money printing in the pandemic and now believes inflation is here to stay. He believes that the consequence is that Governments will have to force savers to hold their bonds and prevent some institutions from holding their current levels of equities. Naturally, this will have consequences for equity valuations, and Russell believes that investors will have to focus on value stocks as equity indices may not perform as they have in the past. This is quite radical thinking, but Russell explains his logic in the podcast.

Jeremy is invested in banks and believes they could prove very cheap if they are disciplined on capital allocation, although he is not confident that their management are up to the task. Russell, formerly a banks analyst, explains that the old 3-6-3 regime (pay 3% interest on deposits, lend money out at 6%, and be on the golf course at 3pm) may come back into vogue – in an era where credit is rationed, “you will have lent all your money by 2.30pm”.

We discuss Tobin’s Q and why some understanding of this variable is particularly important when investing using a capital cycle framework. Like all valuation parameters today, this variable stands near a high (and if it falls to its historical bear market bottom of 0.3x, we could be in for some trouble). Jeremy discusses why accounting is sometimes unhelpful and Russell explains that the Q tracks the CAPE ratio, in spite of increasing emphasis on intangibles. 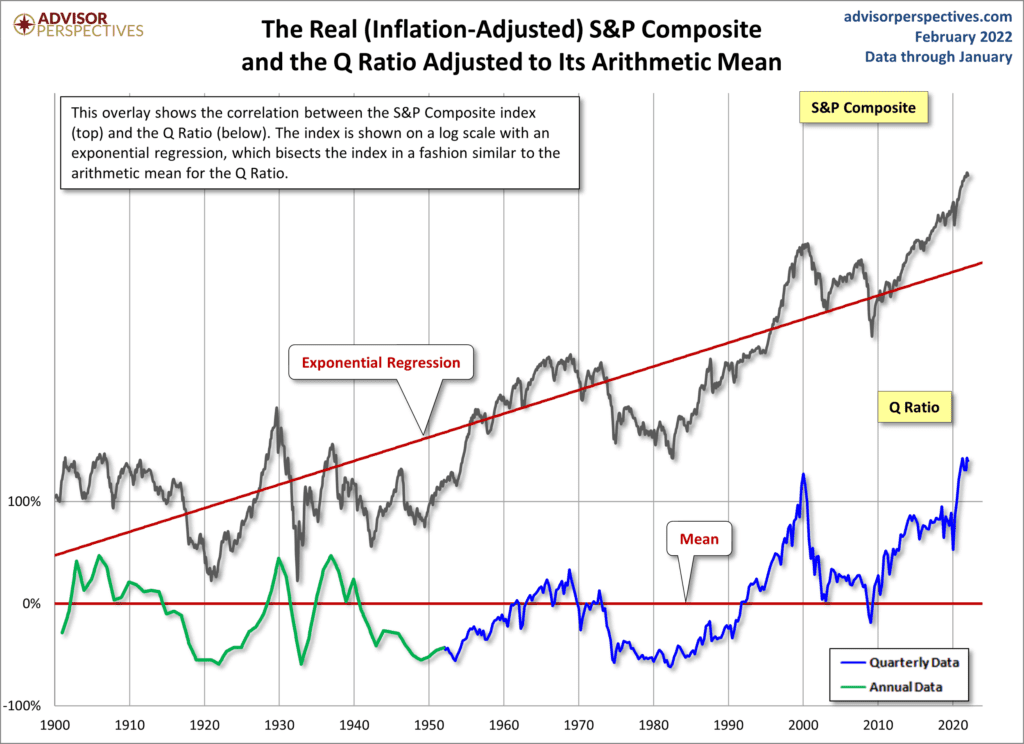 Professor Russell Napier has been an adviser on asset allocation to global investment institutions for over 25 years.. He worked for Baillie Gifford from 1989 and for Foreign & Colonial Emerging Markets from 1994. In 1995 he joined stockbrokers CLSA in Hong Kong as its Asian equity strategist. Since 1999 he has been a consultant global macro strategist advising institutional investors. He is author of Anatomy of The Bear: Lessons From Wall Street’s Four Great Bottoms and The Asian Financial Crisis 1995–98: Birth of the Age of Debt. He founded and runs a course called A Practical History of Financial Markets (in person and online). He founded and is the Keeper of the Library of Mistakes, a free public business and financial history library based in Edinburgh. He founded an online marketplace (ERIC) for the sale of high-quality investment research to institutions. Russell is Chairman of the Mid Wynd International Investment Trust and is Senior Non-Executive Independent Director of Midwich plc. In his spare time (!), he likes to fish. 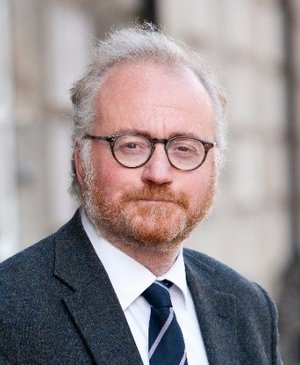 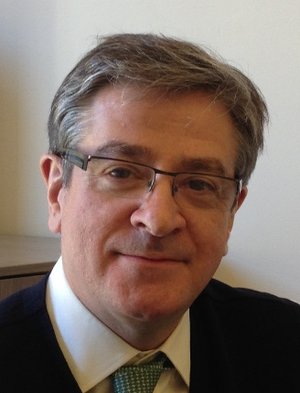 Jeremy Hosking is a founding partner of Hosking Partners and was previously a founding partner of Marathon Asset Management in London. He is a co-author of the cult book Capital Account and its sequel Capital Returns. Russell Napier is quoted on the dust jacket of the sequel. Both books explain the Capital Cycle theory, whose origin Jeremy discusses in the podcast. Nick Sleep, whose letters have received considerable attention (and are available in our library) was a colleague at Marathon and also contributed to the original book.

Hosking was part of a consortium which rescued Crystal Palace from administration and with his wife he owns a country house hotel, Gravetye Manor. He is a well-known railway enthusiast and has a number of steam locomotives (and he takes the tube to work).

The Tao Jones Averages: A Guide to Whole-Brained Investing by Bennett Goodspeed. Neither Russell nor I had even heard of this book which is still available on Kindle. The blurb reads ”Although influenced by logical factors, changes in the market are often irrational and illogical. This savvy and amusing little book demonstrates how- with the help of both the left (logical) and the right (intuitive) hemispheres of your brain- you can anticipate market fluctuations and achieve a greater financial return”.

The classic Adam Smith’s The Money Game, a particular favourite of Steve’s who has read the book 3 or 4 times and Chapter 12 several more. Russell also suggests Triumph of the Optimists: 101 Years of Global Investment Returns by Elroy Dimson, Paul Marsh and Mike Staunton priced at £101 on Amazon UK and $140 on Amazon.com.

Steve met Russell in a bar at the CLSA conference in Hong Kong and Russell has been instrumental in the setting up of Steve’s training business, by introducing him to Stewart Investors in Edinburgh, for whom the original Forensic Accounting Course was designed. Thanks Russell!

Steve has known James Seddon, Jeremy’s partner at Hosking Partners and prior to that at Marathon Asset Management for many years, and James introduced Steve and Jeremy. Russell and Jeremy are old friends so this made for a fun collaboration.

THE LIBRARY OF MISTAKES

Russell is quiet about his extensive charitable activities but one which is well-known and deserves a wider audience is the Library of Mistakes. It is moving to new premises and will be officially opened by Lord Darling the week after the podcast airs. I visited its original site and it is just full of fascinating material on all aspects of investing, but I particularly enjoyed the materials on past frauds. If you are in Edinburgh, it’s a must visit. 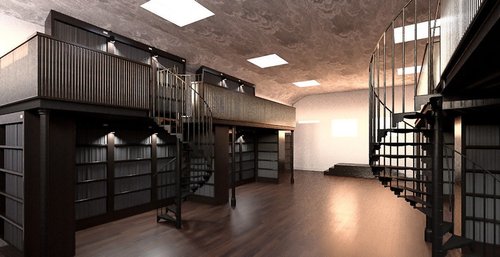 Jeremy’s firm publishes an interesting blog and its strategy is explained on its own website and in this interview with James Seddon. Some of its top US holdings are listed in the table. There is an interesting mix of value and growth and banks are well represented. Note Costo, Berkshire and Delta Airlines. Total US holdings are reported to be $4bn, the company does not disclose its total AUM. 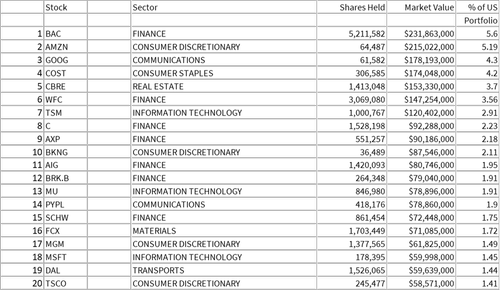 If you want to learn more about Russell’s work, you can

The original book, Capital Account, is now out of print, but Capital Returns is still available – Amazon UK or Amazon.com.

These are Amazon affiliate links and we donate the money raised to charity. Fill your baskets!